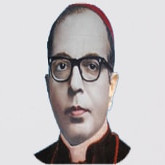 Born at Poovathussery on 25th of February 1921, After finishing successfully the High School studies at St. Aloysius High School, Elthuruth, he had his college education at St. Thomas College, Trichur and graduated in 1943 from the Madras University. He had his ecclesiastical studies in the Papal Seminary, Kandy and was ordained priest on 6 May 1950.

He was nominated the first Bishop of Palakkad on the 20 June, 1974, while he was the Vicar General of the Eparchy of Trichur. He was consecrated Bishop on the 8 September 1974 and took charge of the Eparchy on the same day.

He was a simple, humble and zealous pastor who went about “loving and serving”. He built up the diocese with a vision and taught by his example to be holy and happy. 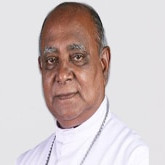 Born at Puthenchira on the 26 July 1934. After the matriculation at his native village he joined St. Mary's Minor Seminary at Thope, Thrissur in the year 1952. He had his Major Seminary studies in Kandy and Poona, and distinguished himself with high ranks at the Licentiate level both in Philosophy and Theology. Mar James Pazhayattil was ordained priest on the 3 October 1961 by H. Em. Cardinal Gracius of Bombay at Papal Seminary, Poona.

He secured his master degree in English literature from St. Thomas College Thrissur. While he was working as a lecturer in the St. Thomas College and hostel warden in the same college he was nominated the first bishop of the new eparchy of Irinjalakuda on 22 June 1978. He was consecrated Bishop on the 10 September 1978 and took charge of the Eparchy on the same day. 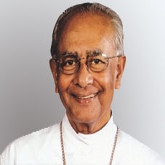 Born at Mattom on the 7 February 1934, Mar Paul Chittilapilly did his priestly studies at St. Joseph's Seminary, Aluva and the Propaganda Fide College, Rome. On the 18 October 1961 he was ordained priest at Rome by the late Archbishop of Changanassery Mar Mathew Kavukatt.

He took Doctorate in Canon Law from the Pontifical Lateran University, Rome. After his return to India in 1966, he was appointed assistant Vicar at Aloor, the professor at St. Thomas' Apostolic Seminary, Kottayam, Chancellor of the Eparchy and Manager of St. Thomas College, Trichur.

In the Year 1978, he was appointed Vicar General of the Eparchy of Trichur. On the 12 May 1987 he had been deputed to lead a team of priests who were sent to take up and organize the pastoral care of the Syro-Malabar Catholics in Mumbai.

He was nominated the first bishop of the newly erected Eparchy of Kalyan by Pope John Paul II on 19 May 1988. He was consecrated Bishop at Mattunga (Bombay) on the 24 August 1988 by His Eminence Mar Antony Cardinal Padiyara. He became the Bishop of Thamarassery on 8 February 1997. He retired on 8 April 2010 and died on 6 September 2020. 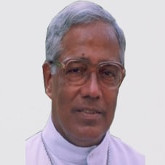 Archbishop Raphael Cheenath was born on 30 December 1934, hails from the parish of Pallissery of the Archeparchy. After school education he joined the Society of Divine Word and was ordained priest on 20 September, 1963. He became the Bishop of Sambalpur on 18 May, 1974 and he was appointed as archbishop of Cuttack-Bhubaneswar on 1 July 1985.

Archbishop Cheenath, as the senior metropolitan archbishop in the region, gave leadership to the Church in Odisha when the anti-Christian wave swept the eastern Indian state. Kandhamal district, which comes directly under his archdiocese of Cuttack-Bhubaneswar, was the most hit in 2008 when the worst anti-Christian violence in India’s modern history swept the state.

Archbishop Cheenath “died a winner” since the Supreme Court of India 2 Aug 2016 granted his petition for enhanced relief to the victims of the violence against the Christian community of Kandhamal. He stoutly fought for justice.

He was retired on 11 February 2011 and he was spending his retirement days under the care of his confreres of Divine Word Congregation and he died on 14 August, 2016. 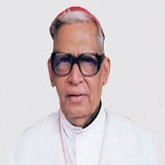 Mar Clemens Thottungal belongs to the Forane church Kandassankadavu. He was born on the 16 April 1909 and ordained priest in the C.M.I. congregation on 24 November, 1938. On 29 July 1968 the Exarchate of Sagar was established by the decree “Quo Aptius” and he was appointed as the first Exarch. On 26 February 1977 the Holy See, by the decree “Divina Verba”, raised the Exarchate into a diocese appointing Msgr. Clemens as its first bishop.

To serve the rural poor on 8 September 1980 he founded the religious congregation named “Sisters of Jesus’. He retired in the year 1987 and died on 15 September 1991. 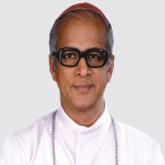 Mar Joseph Pastor belongs to the parish of Aranattukara of this Archeparchy. He was born on 19 March 1930. On 17 May 1960 he was ordained priest in the Dharmaram Chapel by Joseph Cardinal Parekkattil. His first assignment after ordination was as Assistant Director of Social Apostolate in the present Archdiocese of Trichur. He received the Episcopal ordination from Mar Joseph Kundukulam and took charge of the Eparchy of Sagar on the 22 February 1987.

He served the Sagar diocese for nineteen years and he retired on 2nd Feb, 2006. After his retirement he went to live in Sagar Mission Home in Kuttur. 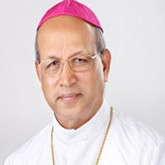 Mar Antony Chirayath belongs to the parish of Aranattukara of the Archdiocese of Trichur . He was born on 30 July 1941 at Aranattukara . He was ordained priest on 2 Jan 1970 for the Diocese of Sagar. In 1972, he was selected to serve in the Roman Curia. From 1972 he was an Official of the Pontifical Council for the Pastoral Care of Migrants and Itinerant People. In 1978 he was given the title of Papal Chamberlain. In 1994 he was made a Prelate of Honour. In 2003 Pope John Paul II elevated him as Office Head. In the same year he was honoured with the title of Apostolic Proto-notary. On 2 February 2006 Pope Benedict XVI elected him third Bishop of Sagar. On 25 March 2006 he was ordained Bishop by His Eminence Varkey Cardinal Vithayathil, Major Archbishop of the Syro-Malabar Church. 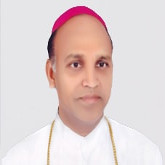 Mar Raphy Manjaly belongs to the parish of Vendoor of the Archdiocese of Trichur . He was born on 7 February 1958 at Vendore. Bishop Raphy Manjaly had his initial schooling in St. Francis Xavier School, Vendore. Having completed his High School studies in Thyagarajar High School in Algappanagar, he joined the diocese of Agra aspiring to become a missionary priest in 1973. He was ordained priest on 11 May 1983 for the Archdiocese of Agra . ln 2007 Pope Benedict XVI nominated him bishop of Varanasi . He received episcopal consecration on 30 April 2007. On 17 Oct 2013 he was appointed as Bishop of Allahabad and installed as the 11th Bishop of Allahabad on 3 Dec 2013. 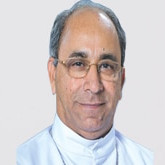 Bishop Bosco Puthur was born to Antony and Kunjilakutty on 28 May 1946 and was baptized on 5 June 1946 in Parappur. Ouseph, Lona, George (Late), Sr. Leo, Sr. Romula, Porinchu (Late), are his brothers and sisters. After his primary education at St. John's School Parappur, he joined Minor Seminary, Thope on 19 June 1962. He started his study of philosophy in St. Joseph's Pontifical Seminary, Alwaye in 1964. In the year 1965, he was sent to the Propoganda Fide College in Rome for his study of Philosophy and theology. He was ordained for the diocese of Trichur, in Rome by Agnello Cardinal Rossi on 27 March 1971. After ordination to the priesthood, he continued his studies of Dogmatic theology in Catholic University of Leuven. On the completion of his higher studies with his Doctoral Dissertation on "From the principle of Hope to the Theology of Hope", he served as Asst. Vicar, Ollur (1976), Fr. Prefect, Minor Seminary (1976), Professor at St. Joseph’s Seminary Aluva (1977-1992), Rector, Minor Seminary (1992-95), Proto-syncellus of the Archdiocese (1995-1999); Cathedral Vicar (1999), Executive Director of Liturgical Research Center, Mt. St. Thomas, Kakkanad (1999-2005). When he was nominated the first Curial Bishop of Syro-Malabar Major Archiepiscopal Curia, he was working as the Rector of Mangalapuzha SeminaryAlwaye (2005-2010). He was appointed as Curial Bishop and Titular Bishop of Foraziana on 18 January 2010 and was ordained on 13 February 2010. On 11 January 2014, he was appointed as the first Bishop of the newly erected Syro-Malabar Eparchy of the St. Thomas The Apostle of Melbourne & Apostolic Visitor of New Zealand.

He hail from Porathur parish. Varunni and Eliakutty are his parents. He was born on 21 April 1962. His brothers and sisters are Mary,Johny,Rosy, Annie,Sunny and Davis. Completing his school studies he joined St.Mary's Minor Seminary, Thrissur. After his formation in St. Thomas Ap. Seminary, Kottayam, he was ordained for the diocese of Trichur, by Mar Joseph Kundukulam at St. Antony's Church, Porathur on 27 December 1987. He did his higher studies in Rome and took doctorate in Canon Law. His thesis was on "The Election of the Patriarch in the Eastern Catholic Canonical Traditions.

He served in the Archdiocese as Asst. Vicar at Mattom, Vicar incharge at Pudussery, Vicar at parannur, Vicar at Puthur, Acting Vicar at Mundur, Fr. Prefect & Procurator at Minor Seminary, Secretary to the Archbishop, Notary, Vice Chancellor and Chancellor at Archdiocesan Curia, Notary, Judge, Adi.Judicial Vicar and Judicial Vicar at Metropolitan Tribunal, Manager, St .Joseph's Eng.Medium H.S Kuriachira, member of the College of Consultors, Vice President, Administrative Tribunal and Director of Archdiocesan Public Relations Department. He also worked as president and member of many a committees and commissions. He was the Rector of St.Mary's Minor Seminary, Madona Nagar,Thrissur, when he was nominated as the first Bishop of the new Diocese of Ramanathapuram on 18 January 2010. He was ordained Bishop on 11 April 2010 at Ramanathapuram by Mar Andrews Thazhath, Metropolitan Archbishop of Trichur. 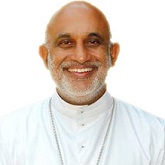 He was born to Ouseph and Thresia on 21 April 1956 and was baptized on 30 April 1956 in Thrissur. Lazar (late), Thomas, Baby (late) Francis, Sosannam, Joy and John, are his brothers and sisters. After his primary education at St. Thomas College HS, Thrissur, he joined St. Mary's Minor Seminary, Thope on 04 July 1971. He completed his study of Philosophy and Theology in St. Thomas Ap. Seminary Kottayam in 1980. He was ordained by Mar Joseph Kundukulam in Thrissur Doloures Basilica. on 21 December 1980. He did his higher studies in Rome and took doctorate in Oriental Canon Law. His thesis was on "Clerical Formation in the Syro Malabar Church: A Historico-Juridical Study".

After his ordination he served as Asst. Vicar, Aranattukara (1981-82), Fr. Prefect & Asst. Procurator, St Mary's Minor Seminary (1982-83), Acting Vicar, Koonammoochy (1983), Acting Vicar, Cherumkuzhy (1983). On returning back from Rome, he served in the Archbishop's house as Vice Chancellor, Chancellor, Adj. Judicial Vicar, Judge and later as Syncellus and Proto-Syncellus. He was the director of DBCLC & Catechism (1992-1995). On 20 January1998, he was appointed as the project officer of the new Marymatha Major Seminary, after a few months appointed as the first Rector of the Marymatha Seminary (1998-2006). He also worked as president and member of many a committees and commissions.

He was ordained as Bishop on 10 April 2010 and appointed as Auxiliary bishop of Trichur and Titular Bishop of Bruni. In 2014, he was appointed as Apostolic visitor for the Syro-Malabar faithful residing outside the territorium proprium. Pope Francis named him the first Bishop of the Syro-Malabar Catholic Eparchy of Shamshabad on 10 October 2017 and he was installed on 7 January 2018.