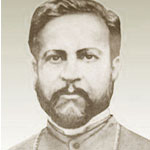 Born at Chittagong (British India, present Bangladesh) on the 15th of May, 1838, Dr. Medlycott, had a distinguished educational career in India and later in the Propaganda Fide College, Rome, where he took his Ph.D. Ordained Priest on 17 March 1861, he was nominated titular Bishop of Tricomia and Vicar Apostolic of Trichur on 13 September 1887, consecrated Bishop on 11 December 1887, by H.E. Mgr. Aiuti, the Delegate Apostolic and took charge of the Vicariate on 18 December 1887. He led the Vicariate till 1896.

Dr. Medlycott spent his last days in Bangalore where he breathed his last on 4 May 1918. His mortal remains were brought from Bangalore and re-interred first in the Dolours Church, Trichur on 4 May 1945 and later in the crypt of the Lourdes Cathedral, Trichur on 19 December 1950 by Mar George Alapatt.

Born at Njarackal, (present-day Ernakulam district) on 12 of June 1857 and ordained priest on 11 August 1883, Fr. John Menacherry was the Secretary to Mar Medlycott. On 11 August 1896, he was nominated titular bishop of Parlus and Vicar Apostolic of Trichur. Mar John Menachery became the first native Vicar Apostolic of Trichur. He was consecrated Bishop on 25 October the same year at Kandy, by the Delegate Apostolic H. Ex. Dr. Zaleski and took charge of the Vicariate of Trichur on November 4 of the same year.

In 1911 Dr. Menacherry made his "Ad Limina" Visit to Rome. After 23 years of service Dr. Menacherry slept in the Lord on 19 of December 1919, and was interred in the crypt of Lourde's Cathedral. 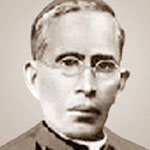 Mar. Francis Vazhapilly was born on 18 May 1878 at Puthenvelikara, ordained priest on 22 December 1906, nominated titular bishop of Philadelphia and Vicar Apostolic of Trichur on 5 April 1921. He was consecrated bishop on 6 July of the same year in the Lourde's Cathedral by the Delegate Apostolic H. Ex. Dr. Peter Pisani and took charge on the same day. On 21 December 1923, when the Syro-Malabar Hierarchy was established, Mar Francis Vazhapilly became the first bishop of the Eparchy of Trichur. In 1929 he made his " Ad Limina" Visit to Rome.

Mar. Francis Vazhapilly visited Rome and European countries keenly observing the architecture of the churches there. The present Our Lady of Dolours Basilica (Puthenpally), known as the largest church in Asia was built on the plan he drew on his return from abroad. On 10 October 1925, Mar Francis christened the new church as the Church of Our Lady of Dolours. On 21 December 1929, Mar Francis Vazhappilly laid the foundation of the colossal church.

He passed away on 12 May 1942, and his body was laid to rest in the Basilica of Our Lady of Dolours, Trichur. In 1999 a part of his mortal remains was brought to Lourde's Metropolitan Cathedral and interred in its crypt. 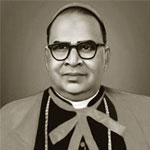 Born on 11 February 1900 at Karanchira, Dr. George Alapatt had his college education at St. Thomas' College, Trichur and his ecclesiastical education at the Propaganda Fide College, Rome, where he took his PhD and S.T.D. He was ordained priest on 17 December 1927 and nominated Bishop of Trichur 11 March, 1944. He was consecrated Bishop on 1 May, 1944 at Trichur by H. Ex. Dr. Leo P. Kierkels, the Apostolic Delegate, and on the same day he took charge of the Eparchy. He attended all the four Sessions of the Vatican Council II (1962 - 1965).

In 1967 the University of Detroit conferred on him the Honorary Degree of Doctor in Human Letters. In 1969, on the occasion of his Episcopal Silver Jubilee, H. H. Pope Paul VI nominated him as "assistant at the Papal Throne". He retired on 4 June 1970, and was appointed titular bishop of Irenopolis in Isauria. He continued as administrator of the Eparchy till 16 August 1970.

While he was taking rest at Sarto Sadan, Karanchira, on 6 November, 1973, he slept in the Lord and in accordance with his desire his body was interred at St. Pius X Chapel in Karanchira. On 10 Feb 1999 a part of his mortal remains was brought from Karanchira and interred in the crypt of the Metropolitan Cathedral, Trichur. 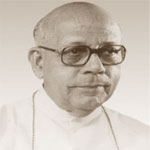 Mar Joseph Kundukulam born on 26 September, 1917 at Parappur. He had his ecclesiastical studies at St Mary’s Major Seminary, Trichur and St. Joseph's Pontifical Seminary, Aluva. He was ordained priest on the 20 December, 1942. Ever since his ordination he got immersed in the pastoral ministry till he was nominated Bishop. He was the director of St. Anne's Charitable Institute from 1958 to1970.

He started St. Christina's Home, Pullazhy, a rehabilitation center for Unwedded mothers, in the Year 1967. He dedicated his life for the service of the poor and is widely acknowledged as "father of the poor". He was an excellent retreat preacher who emphasizes that Christianity is truly a joining together of earth with heaven. He was an apostle of Christ who is concerned with Man's Heavenly and earthly good.

In a changing world he raised his mind above the changing conditions of earthly existence to the rights of eternal life which will be consummated in unending happiness and peace. Nominated Bishop of Trichur by Pope Paul VI on 4 June 1970 and consecrated on 16 August 1970 by Bishop George Alappatt, he took charge of the Eparchy on the same day.

He retired on 15 Feb 1997. He took rest at St. Christina's Home, Pullzhy and died during his visit to Mission stations in Africa on 26 April 1998 at Wamba in Kenya. He was interred in the crypt of Lourde's Metropolitan Cathedral on 29 April 1998. 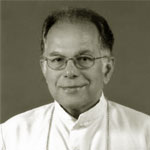 Archbishop Mar Jacob Thoomkuzhy was born at Vilakumadam in the Eparchy of Palai on December 13, 1930. At present his family belongs to the Sacred Heart Parish, Thiruvambady in the Eparchy of Thamarassery. He had his seminary studies at the St. Joseph's Pontifical Seminary, Alwaye and Pontifical Urban University, Rome. After ordination he continued his studies in Rome and took his Doctorate in Canon and Civil Law from the Lateran University, Rome. On coming back he was appointed secretary of Mar Sebastian Vallopilly the then Bishop of Thalassery and Chancellor of the same Eparchy. Later he was appointed Rector of the Eparchial Minor Seminary at Tellicharry. After a few years he resumed his studies at Fordham University, NewYork from where he holds a Masters degree in English literature. Soon after his return from the United States of America he was again appointed Rector of the Eparchial Minor Seminary, Tellicherry and worked there until his nomination as the first Bishop of the newly erected Eparchy of Mananthavady in 1973.

He was ordained Bishop on 1 May 1973 by the late Joseph Cardinal Parecattil assisted by late Mar Sebastian Vayalil and Mar Sebastian Valloppilly. The Bishop took charge of the diocese on the same day. He served the Eparchy of Manathavady for 22 Years. On 7 June 1995 he was appointed bishop of Thamarassery and took charge of his office on 28 July 1995. On 18 Dec. 1996, he was appointed Archbishop of Trichur and was installed on 15 Feb 1997. Marymatha Major Seminary, Jubilee Mission Medical College, Jeevan TV, Jyothi Engineering College, Mahajubilee Training College (B.Ed. College), etc. are some of his pioneering contributions to the Catholic Church and society. He retired from the office on 18 March 2007 and stays at St. Mary's Minor Seminary, Madona Nagar, Trichur.